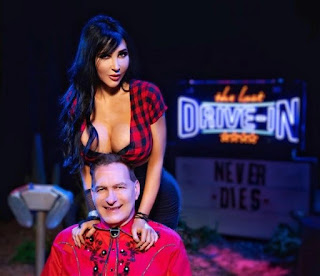 AEW wrestler and Fozzy lead singer Chris Jericho will join Joe Bob Briggs and Darcy “The Mail Girl” as their special guest co-host for the second season premiere of “The Last Drive-In” on Shudder. It will debut on 4/24/20 at 9pm EST.

From the teasers given, it looks like they will be airing “Bloodsucking Freaks (1976). New subscribers can get free Shudder trial memberships for 7 days, or 30 days, depending on the offers being given at various times. I know “SHUTIN” was one previous code for 30 days. Jericho was plugging one at Try.Shudder.com/Jericho also for 30 days (I have not personally seen an exact link to that one). https://www.shudder.com/?utm_source=google&utm_medium=paid-search&utm_content=brand&utm_source=google&utm_medium=paid-search&utm_content=brand&gclid=Cj0KCQjw4dr0BRCxARIsAKUNjWQfQZGSBfUtx47C-OBYWdxBfs3ZmyzcRapuUCWH5PkiFsZp9T1ohL0aAmpiEALw_wcB

Darcy (aka Diana Prince) is a huge pro wrestling fan. She’s been seen on camera in the front row during a few AEW Dynamite shows in the past.

Briggs is still hugely popular with his fan base to this day and a major reason for Shudder’s success the last few years. He started his TV horror hosting career on The Movie Channel’s “Drive-In Theatre” in 1987. It was the highest rated show on TMC at one point. He would give comedic and sarcastic reviews of the movies each week, along with a “body count and boob count” tally. When TMC canceled the show due to format changes and budget cuts in the mid-1990s, TNT picked Briggs to be the host of “MonsterVision” on weekend late nights from 1996 to 2000. The movies were edited down because of being on basic cable, but Briggs brought as much of his old TMC persona and gimmicks as the TNT censors would allow.

In 2018, Shudder wanted to do a nostalgia experiment. They brought Briggs in to host “The Last Drive-In” marathon special of thirteen different horror movies. It was so successful to the point that the streaming service actually crashed for a little while from getting so much traffic. What was originally planned to be a “one-off” return led to more marathons and eventually a weekly Friday night season of shows.