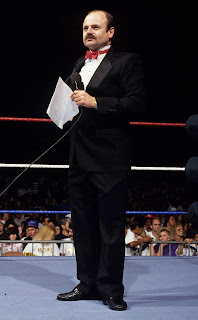 Howard Finkel has passed away at age 69. He had been in declining health for some time after having a stroke a couple of years ago. His unmistakable big booming ring announcer voice is one of the rich and seminal parts of WWE’s history that made so many great moments even more special.

He started with the then Worldwide Wrestling Federation in the 1970s and was hired in as the very first full time employee to the new World Wrestling Federation in 1980. Part of his office job in the company was monitoring the old 900 and 976 “insider news” hotlines and newsletters throughout the 1980s and 1990s. He reported back to Vince McMahon on what was being said about the WWF’s planned storylines and backstage politics so they could try to figure out who always leaked the information. It would also lead to a few “dirt sheet” reporters having heat with the office and the wrestlers in the locker room for spoiling plans or making people look bad if the mainstream press picked up on it.

Throughout his career, Finkel would at times get involved in storylines leading to him actually getting put into comedy matches (like Tuxedo Matches) because Vince McMahon personally thought it was funny.


In the early 2000s, McMahon decided Finkel was “too old” to continue as ring announcer and the role went to Lillian Garcia full time. He still remained working behind the scenes for many years afterwards.

He made the Madison Square Garden, Boston Garden, and Philadelphia Spectrum houseshows feel larger than life in the 1970s and 1980s. Those events would air on MSG Network and USA Network with mostly everything eventually released on the classic WWF Coliseum Home Videos during the boom period of video stores. The ring bell would sound off multiple times before and during his introductions of the wrestlers to try to settle things down because the crowds were so rowdy in those days. There were fans who brought in weapons wanting to “get a piece” of Ken Patera, Roddy Piper, and other top heels at the time especially if they were against Andre the Giant or Hulk Hogan.


Arguably, perhaps Finkel’s greatest title change announcements were Hulk Hogan winning the WWF Title for the first time in 1984, and Ricky “The Dragon” Steamboat winning the Intercontinental Title at Wrestlemania 3 over Randy Savage in 1987.