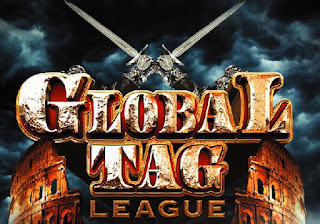 Takashi Sugiura and Hideki “Shrek” Sekine vs. Akitoshi Saito and Masao Inoue in a Block B Match

Kaito Kiyomiya and Shuhei Taniguchi vs. Masa Kitamiya and Kenoh in a Block A Match

Kitamiya pinned Taniguchi in a sudden finish. It looked like Taniguchi was going for a lariat but Kitamiya hit a spear then followed up with an inside cradle for the pin.

Go Shiozaki and Katsuhiko Nakajima vs. Daisuke Sekimoto and Yoshiki Inamura in a Block B Match

Shiozaki pinned Inamura after the Gowan Lariat in a hard fought match to win the B Block and advance to the finals. (Nakajima and Shiozaki beat Sekine and Sugiura on yesterday’s show).

Naomichi Marufuji and Masaaki Mochizuki vs. Hijo de Dr. Wagner Jr. and Rene Dupree in a Block A Match

Wagner pinned Marufuji after a moonsault set up by Dupree’s piledriver to win the A Block. Shiozaki and Nakajima came out to have a brief confrontation with them after the match to hype the finals on 4/18 with a 6am EST start time on DDT Universe.