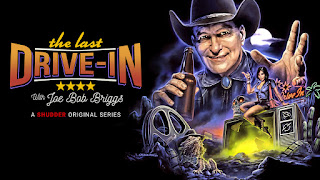 I was not able to catch “The Last Drive-In” with Joe Bob Briggs on Shudder when it aired last night. It’s good to know that the show is not only posted up quickly on VOD, the double feature is actually spilt into two separate parts if you only want to watch one movie instead of the entire show at once. You can get a 30 day free trial to Shudder by entering the promo code “SHUTIN”. https://www.shudder.com/series/watch/the-last-drive-in-with-joe-bob-briggs/d7e1edc651c7f9b7?season=1

Lots of people, including myself, guessed the first movie wrong based on the clues given. We thought it was going to be “Sleepaway Camp”. It was “Chopping Mall” (1986) with special guest Kelli Maroney who is the star. 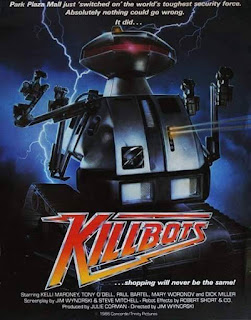 Maroney said she trained to be a serious stage actress but then ended up getting a long running role on ABC’s old daytime soap opera “Ryan’s Hope”. From there, she became known as a drive-in queen with big screen parts in “Fast Times At Ridgemont High”, “Night of the Comet”, and “The Zero Boys” (great movie!). She said she thought her acting teachers would think less of her for taking pop culture entertainment work but they told her that the whole goal was to just get work.

She said “Chopping Mall” co-star Tony O’Dell went on to become a respected acting teacher and dialect coach. She and Joe Bob were mistaken in saying O’Dell was best known for being on “Saved By The Bell”. He was actually on ABC’s 1980s sitcom “Head Of The Class” but anyone can see the title confusion.

They said the MPAA wanted to give the movie an NC-17 rating because Barbara Crampton’s burning death scene was too prolonged. It had to be edited down a little to earn the R.

When the movie was first released under the name “Killbots”, it had a 90 minute running time and didn’t do well. Roger Corman suggested it be repackaged and cut down to 77 minutes. Allegedly a repair main working at the studio randomly suggested the new title of “Chopping Mall” and Corman liked it.

Maroney went on to make a few more movies with director Jim Wynorski and Corman including “Big Bad Mama 2” and the remake of “Not Of This Earth” (starring Traci Lords in her first mainstream movie after her adult entertainment career).

Darcy ended the first half coming out dressed as Maroney’s character from “Chopping Mall”. They really put over Chris Jericho coming up as guest co-host as a big deal. Joe Bob said Darcy had been to a few of Jericho’s matches holding up signs in the crowd begging him to be a guest. They said he’s a big horror fan and he saw her.

“Bloodsucking Freaks” from 1976 is the next movie. They’ve plugged it and Jericho’s appearance for several days, so no secrets here. (I’m sure they’ll mention the character named Ralphus in the movie is the reason Jericho had a henchman/sidekick with the same name for a time in his WCW career). Joe Bob says the movie is the favorite of Jericho and he’s an expert on it. He mentions that Jericho has also done some acting and appeared in “Sharknado 3”. 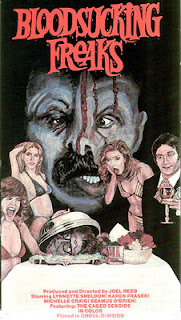 Joe Bob says Jericho is in the tradition of him interviewing pro wrestlers. He brings up the time he had Roddy Piper on (during the old TNT “Monster Vision” show). He then tells a great story about hanging out with The Freebirds in Dallas and named them all. He said they really loved hanging out at strip clubs and Terry Gordy would get very drunk and headbutt people. He said Michael Hayes would have to get Gordy under control. He said it was probably controversial for him to hang out with The Freebirds because they were the sworn enemies of “the sainted” Von Erichs in Dallas.

Joe Bob puts over Jericho’s time in “The WWF” and says he’s now in AEW which is already “blowing away WCW”. He said AEW is the biggest wrestling company to come along in years. He said he and Jericho were on TNT at the same time when Jericho was in WCW and he was hosting “Monster Vision”. He ripped the old TNT management and said they “destroyed the wrestling franchise” because they didn’t like wrestling. He said they tried to try to be like “The United Nations Song Fest” with programming nobody wanted to watch. (FYI- they canceled “Monster Vision” in 2000 so Joe Bob has had heat with the old network management as well).

I don’t know when this was recorded, but Joe Bob says AEW is on TNT two nights a week. He mentions Jericho is also lead singer of Fozzy and has a popular podcast. He said they met each other when Jericho invited him to be a guest on the podcast. He mentioned Jericho also wrestles in Japan but he didn’t mention New Japan by name. He said Jericho travels so much, half of his life is spent on a plane.

Jericho joins the show. He said he first became a fan of the movie with his friends as they would go to a store near his house that would carry these types of movies. He and his friends would call the movies “Cheap Asses”. He said he and his friends had rules on what they’d rent: it had to be rated R and star people they never heard of.

Job Bob mentions Jericho’s dad was a hockey player and asked why he didn’t follow him into hockey. Jericho said he wasn’t very good at it and was more into creative stuff instead of hockey.

Job Bob says “Bloodsucking Freaks” was cursed because several actors in it died around it including main star Seamus O’Brien. He died at 44 after he confronted a burglar in his home (he was stabbed to death).

Jericho says the movie is uncomfortable to watch but it’s not a badly acted at all. He said you can tell O’Brien was a serious stage actor. He said the Ralphus character is one of his favorites in cinematic history. Joe Bob runs down more trivia about the movie including something about stunt doubles. Jericho was impressed and said he didn’t even know about it. He asked Joe Bob where he comes up with it.

Jericho explained WCW’s Ralphus as his personal security. He said it was in 1998 when he first saw “Bloodsucking Freaks” and he was feuding with Goldberg. He said Goldberg always had big security surrounding him so he wanted to have a parody of it. He said there was a guy on WCW’s crew who drove the lighting rig and he was always friendly. He asked the guy if he wanted to come to the ring with him and the guy immediately agreed. He said he named him after the movie character because his teeth reminded him of it. He said he wanted to have WCW Ralphus on his podcast and emailed him but he must have ignored it because he never heard from him.

Darcy joined them wearing a combination WCW Ralphus outfit and ballerina costume like the character in the movie.

Joe Bob said Fozzy has some hardcore and dark lyrics. Jericho said he wrote some songs but it’s mostly the band’s producer. He said they started off as cover band called “Fozzy Osborne”, but when they got signed to a record deal, they were worried Sharon Osborne would sue over the name.

This was taped before “Bloodsucking Freaks” director Joel M. Reed died. Joe Bob said Jericho should have him on his podcast and Jericho said someone should do a watch a long with him. Reed died on 4/12/20 at 86 from the coronavirus.

Joe Bob said the movie plays all around the world but it still doesn’t last long in some countries but it’s so graphic and controversial.