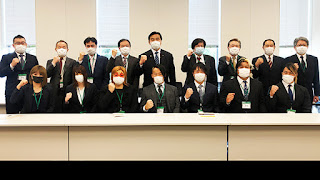 In the thirty minute meeting, the group asked for what basically sounded like unemployment benefits for pro wrestlers and possible bailouts to pro wrestling companies. They also asked for virus testing kits to be given to them so they can test all of their rosters and crew in hopes of allowing events to continue with fans for the paying gates.

DDT, Tokyo Joshi, and NOAH have been airing several live no fans shows on DDT Universe at the ¥900 a month subscription cost to try to have at least some money coming in. All Japan has selectively done the same on their own pay streaming service, AJPWTV. New Japan and STARDOM have not held any events for several weeks during the health crisis.

Today’s meeting has already caused some outrage in the Japanese press and among citizens. The feeling is, if pro wrestling ends up getting government assistance, then all other sports and entertainment in the country should be eligible as well.