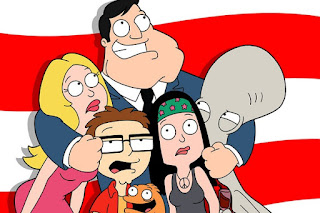 TBS will run a marathon of American Dad reruns beginning at 2:30pm EST on 4/27/20 to celebrate the show’s fifteen years on air. There will be fifteen episodes personally picked by the show’s creators as the favorites. It all leads up to a new episode at 10pm EST called “Cheek To Cheek: A Stripper’s Story”.

The show will also reach a 300th episode milestone later this year and it has been renewed by TBS for at least two more seasons. It averaged 18 million viewers last season.

Some favorites of mine in no particular order that didn’t make the list are: “Stan of Arabia”, “The Abusive Terrestrial”, “Spring Breakup”, “Daddy Queerest”, “G-String Circus”, “Man In The Moonbounce”, “The One That Got Away”, “License To Till”, “Fart-Break Hotel”, “The People vs. Martin Sugar”, “Max Jets”, “LGBSteve”, “A Boy Named Michael”, “The Talented Mr. Dingleberry”, “West To Mexico”, “Wild Women Do”, “The Hand The Rocks The Rogu”, “Demolition Daddy”.

American Dad debuted on Fox on February 6, 2005 in the prestigious spot after the Super Bowl. The final episode on the network was “Blagsnart: A Love Story” guest starring Kim Kardashian as a friendly soft spoken alien.