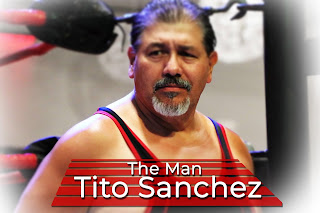 San Antonio pro wrestler and promoter Tito Sanchez has passed away after long complications from cancer and kidney issues. He started his pro wrestling career in 1984.

Sanchez owned T-N-T Pro Wrestling and a training school. He made his in-ring return to T-N-T back on 10/6/19 after a year and a half away dealing with his health issues. He lost the match to Marc Anthony.

They ran their first show of 2020 back in February. A few of the wrestlers said they were concerned about him as he seemed to be looking in decline on that day.. He was determined to have the event not so not to disappoint fans and the workers. The March show ended up being canceled due to his health issues.There were plans to do an April show, but that ended up getting canceled because of the virus pandemic.

T-N-T was scheduled to be part of a cancer benefit show with Gulf Coast Wrestling Alliance, Branded Outlaw Wrestling, Galactic Pro Wrestling, and River City Wrestling on 6/7/20. The status of that event is pending like everything else in life because of the virus.