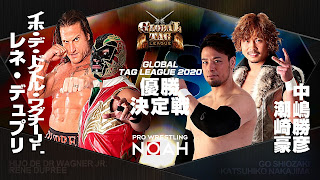 Hijo de Dr. Wagner Jr. and Rene Dupree won the NOAH Global Tag League 2020 over Go Shiozaki and Katsuhiko Nakajima when Wagner pinned Nakajima after a moonsault set up by Dupree’s piledriver. They are the first gaijin team to win it. This earns them a GHC Heavyweight Tag Titles shot against champions Naomichi Marufuji and Masaaki Mochizuki (who briefly confronted the GTL 2020 winners after the match).

I was covering Ice Ribbon live on YouTube at the same time so I did not see the full NOAH show yet. When I do, I’ll add in the results here.

NOAH full results from Japan on 4/18/20 and airing live on DDT Universe: https://www.ddtpro.com/universe/videos/8437