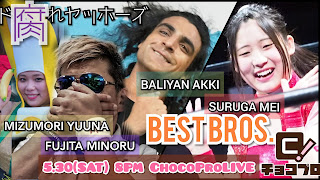 Honda pinned Kirihara after breaking up Sakura’s La Magistral Cradle attempt with his fox puppet to steal the win.

Akki and Suruga get the double team bridging pin on Mizumori. Mitsuru Konno appeared after the match and cut a promo on the sulking Fujita and Mizumori. She teased giving Suruga an apple but ate it herself.

They had a birthday celebration for Akki and Suruga to close the show.