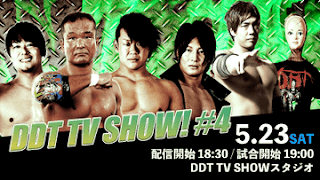 Ironman Heavymetalweight Champion Danshoku Dino went to another no-contest with Antonio Honda in 10:19. Honda harnessed “the power of the fox” (the “Gon, the Fox” fable) and got Hisaya Imabayashi, Hideki Okatani, Daisuke Kiso, and Keigo Nakamura to help him attack Dino. The screen went dark and we next saw Dino shoot up out sleep in his own home bed as if it was all just a nightmare. He got out of bed and left the room. The covers slowly drew back and Okatani popped up giving the fox hand gesture like he was really in bed with him the whole time to make it ambiguous.

Yuki Iino and Akito beat Kazusada Higuchi and Yukio Naya in 9:35 when Akita submitted Naya with a figure four leg lock. Iino took out Higuchi and Naya at the same time with a spear then speared Naya again while he was trapped in the figure four.

Jun Akiyama pinned Mizuki Watase after an Exploder Suplex in 11:21.

DDT Universal Champion Daisuke Sasaki won a 3-Way Match over Chris Brookes and Naomi Yoshimura by throwing Brookes out of the ring and stealing the pin on Yoshimura in 11:47. This was originally supposed to be a 4-Way with MAO but he is injured. After the match, Brookes got on the mic and told Sasaki “that was bullshit!” Sasaki said Brookes had no chance at the title then kicked him in the crotch and once again threw him out of the ring. Sasaki said he will have Shunma Katsumata as his next challenger. Katsumata came out with a spiked baseball bat. Isami Kodaka also appeared in the segment. He said he’s won all of the previous DDT Titles but this is a brand new one he wanted to add. Sasaki accepted and told Shunma he wasn’t needed as a challenger now. All three fought and Shunma hit Sasaki with the spiked bat. Hisaya Imabayashi said they will have a 3-Way Hardcore Match for the title on the first day of the Wrestle Peter Pan event which takes place on 6/6/20.

Yoshihiko (the blow up doll) pinned Konosuke Takeshita after the Rinne Tensho in 22:21. Yoshihiko has now beat all of the members of ALL OUT. The referee was bumped again so Takeshita called in Iino, Katsumata, and Akito to try to help him win the match. The returning Akihiro (the other blow up doll) made the save for Yoshihiko and cleared everyone out.

Masato Tanaka and HARASHIMA beat Tetsuya Endo and Soma Takao when Tanaka pinned Takao after the Sliding D in 15:07. After the match, Shinya Aoki came out to cash in his title shot against Tanaka.

Konosuke Takeshita and Akito vs. Yoshihiko and Akihiro