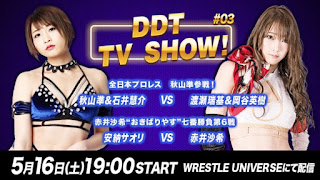 Ironman Heavymetalweight Champion Danshoku Dino went to a non-contest with Antonio Honda in 6:28 when Honda fell face first into Dino’s crotch to knock each other out. There were countless crotch shots exchanged between the two. Each time they did it, a sound effect bell “ding” would ring. A 1960s and 1970s TV sitcom “laugh track” was also playing throughout the match with the comedy spots.

HARASHIMA and Naomi Yoshimura beat Mad Paulie and Soma Takao in 8:32 when Yoshimura pinned Paulie after the Drill A Hole piledriver.

Yoshihiko (the blow up doll) pinned Shunma Katsumata in a Hardcore Match after the Rinne Tensho into a pile of Legos in 15:48. They used a chairs, a bat, a trash can and ladder as the weapons. Katsumata sandwiched Yoshihiko between a chair and repeatedly folded it up to make it look like he was cutting Yoshihiko with a pair of scissors. Yoshihiko then gave him a Suplex on the chair. Shunma tried to give a powerbomb off the top rope into chairs set up on the floor, but Yoshihiko reversed him with a hurricanrana. Shunma later threw a pile of folded chairs on Yoshihiko in the ring and delivered a top rope splash for a near fall. Yoshihiko choke slammed Shunma on the ladder and then brought in the pile of Legos. The referee got bumped. Konosuke Takeshita ran in the ring to try to help Shunma. He gave Yoshihiko a powerbomb into the pile of Legos. Yoshihiko recovered and took him down with a dive to the floor before the finish so he couldn’t interfere more.

Jun Akiyama and Keisuke Ishii beat Mizuki Watase and Hideki Okaya when Akiyama used a Boston Crab on Okaya for the submission in 10:39.

Saki Akai pinned Saori Anou after the Quetzalcoatl in 11:21. It was a brawl for the most part giving Anou a noticeable bruise on her right side. This was Match 6 of Akai’s Okibariyasu 7 Match Series that started back in November. She is 3-3 with wins over Sakura Hirota, Miranda Gordy, Anou and losses to Tsukasa Fujimoto, Rina Yamashita, Syuri. After the match, Hisaya Imabayashi told her that he didn’t have a name to give her yet as an opponent for Match 7 but assured her it will be someone suitable for the last one of the series.

Daisuke Sasaki and Tetsuya Endo beat Konosuke Takeshita and Akito when Endo pinned Akito in reversal of a Sharp Shooter submission attempt in 15:12. Winning the fall over Akito earned Endo a chance to face Kazusada Higuchi for the KO-D Openweight Title Challenger Sword. He immediately called Higuchi out and cashed in the opportunity.