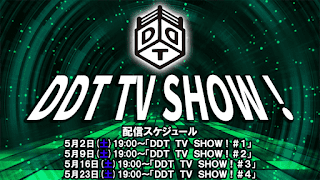 Yoshihiko (the blow up doll) pinned Yuki Iino with the Rinne Tensho.

Ironman HeavymetalWeight Champion Danshoku Dieno pinned Akito with an inside cradle after a kick to the groin when Akito tried to apply a figure four leg lock.

Maki Itoh and Chris Brookes beat HARASHIMA and Pokotan when Itoh pinned Pokotan after the Flying Big Head (while wearing Pokotan’s mascot head) set up by a double underhook piledriver from Brookes.

MAO won a 3-Way Match over Konosuke Takeshita and Naomi Yoshimura by pinning Takeshita after a Cannonball 450 Splash. The referee was bumped and the lights went out. When they came back on Yoshihiko was attacking Takeshita and gave him a choke slam to set up the finish.

DDT Universal Champion Daisuke Sasaki beat Antonio Honda by face lock submission. After the match, Chris Brookes came out to challenge. Sasaki shoved him. Brookes gave him a kick and laid him out with the double underhook piledriver. He got on the mic and said “Say something now in any language” then held the belt over Sasaki.