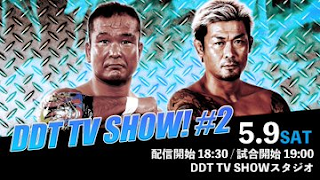 Akito pinned Yoshihiko (the blow up doll) after Konosuke Takeshita attacked Yoshihiko during a referee bump.

Konosuke Takeshita pinned Gota Ihashi with an Oklahoma Roll after Ihashi missed a moonsault. The referee was bumped before the finish and the lights went out. When they came on Yoshihiko was in the ring and attacked Takeshita. Takeshita was able fight off and give a piledriver.

All Japan’s Jun Akiyama appeared and told viewers that he has been invited to be a guest coach in DDT. They acknowledged he was supposed to go to America to guest coach at WWE Performance Center but he never made it because of the virus pandemic.

Chris Brookes pinned Shunma Katsumata in a Hardcore Match after three chair shots to the head and the praying mantis bomb into a table set up in the ring.

After the match, DDT Universal Champion Daisuke Sasaki hit Brookes with a chair and said he will defend the title against him. MAO and Naomi Yoshimura made the save. Brookes recovered and gave Sasaki a praying mantis bomb. MAO and Yoshimura said they wanted a shot at the Universal Title too. Brookes said it was his match and it’s only a singles and he got into a shoving match with them. DDT General Manager Hisaya Imabayashi ran in the ring and got on the mic to stop them. He said it would be a 4-Way Title Match. Brookes then gloated over Sasaki and promised to win the title.

After the match, Kazusada Higuchi came to the ring with the #1 con. Sword. He had a face off with Tanaka who held up the title.