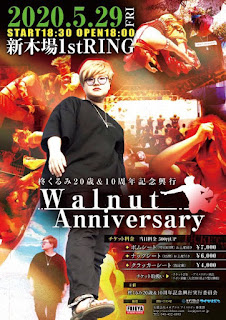 Kaho Kobayashi pinned Thekla after a Fisherman’s Buster in 8:39.

Hamuko Hoshi and Maika Ozaki beat Tsukasa Fujimoto and Arisa Nakajima in a comedy stipulation match. There were points for pins, submissions, and also for eating hot dogs. Nakajima pinned Ozaki with a Tiger Suplex for ten points but Hoshi and Ozaki ate far more hot dogs and ended up winning the match by a score of 12-11.

Yuu pinned Ibuki Hoshi after the Last Ride Powerbomb in 6:53.

Chou-un Shiryu won a 3-Way Hardcore Match over Akane Fujita and Risa Sera by pinning Fujita after the Chinese Bombs away on a ladder and chair in 14:58. Sera had a barb wire kendo stick as one of the weapons.

Shigehiro Irie and Mochi Miyagi beat Hiiragi Kurumi and Soma Takao in the main event when Irie pinned Kurumi after the Big Clothesline in 21:51.

After the match there was a ceremony for Kurumi. Hikaru Shida, Nanae Takahashi, Makoto and others paid tribute to her by video messages.
Labels: Ice Ribbon