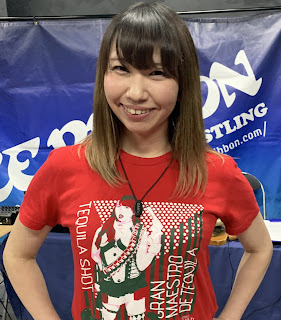 These are shows produced by Tequila Saya that always take place on a Wednesday. They have not done one in a few months. Saya retired as a pro wrestler on 12/31/19 and took some time off, then the virus pandemic caused disruptions in the schedules. They only do two or three matches per show.

Before the today’s matches, there were athletic game competitions between Tsukasa Fujimoto, Satsuki Totoro, Matsuya Uno and Yappy (Team Red) vs. Tsukushi, Maika Ozaki, Suzu Suzuki and Thekla (Team Blue). Team Red won the penalty kick round and Team Blue won the sit-ups and  push-ups round.

Tsukushi and Maika Ozaki beat Matsuya Uno and Yappy when Tsukushi pinned Uno with a La Magistral Cradle in 10:51.