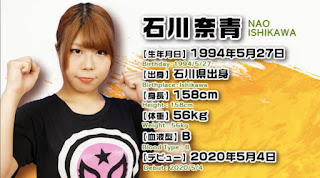 There are no IW19 Tournament matches scheduled for today. Trainee Ishikawa, now named Nao Ishikawa, will have her official debut match in a tag team main event.

Tequila Saya and Thekla are the broadcast team to start off because Yappy will be in the opening match.

Yappy got the pin after the hip drop in a series of reversing each other’s pinning attempts. Yappy went over to the announcers desk to be interviewed and she was super excited about the win. Hamuko Hoshi came out to lecture Ibuki (her daughter) about the loss.

Maya Yukihi and Thekla vs. Satsuki Totoro and Risa Sera

Yappy joins the English side of commentary to replace Thekla.

Totoro pinned Thekla after the diving senton. Totoro and Sera teamed up to throw Yukihi to the floor before the finish. Thekla’s “Exorcist spider moves” were on full display. Totoro slammed her but she popped up like a spider then Sera came in for Totoro to slam her on top to squash the spider. Thekla later hit the spider spear on Totoro.

Miyagi got the pin after the Metabolic Sand.

Despite being a no fans show, streamers were tossed in the ring at Nao’s introduction and she had a few seconds to take in the moment. She fought back tears and patted her face to get psyched up for the start of the match.

Yappy said Nao first came in to begin pro wrestling  in September 2018 but “couldn’t catch a break” and things kept getting delayed for her until today.

Fujimoto submitted Ishikawa to a straightjacket Camel Clutch. Ishikawa did get a near fall on Fujimoto with a backslide. Tsukushi and Fujimoto shook hands with Ishikawa as a sign of respect afterwards.