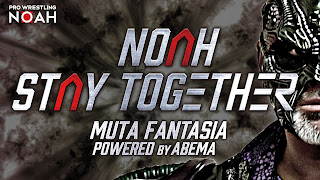 This is a no fans show due to the virus pandemic.

Atsushi Kotoge and Kotaro Suzuki beat Hajime Ohara and Seiki Yoshioka when Suzuki pinned Yoshioka with the Endless Waltz in 12:17.

Takashi Sugiura and Rene Dupree beat Yoshiki Inamura and Nioh when Dupree pinned Nioh after a diving body press in 7:46.

Kaito Kiyomiya pinned Haoh after a German Suplex in 11:37.

YO-HEY and Tadasuke went to a brawling double count with HAYATA and Yoshinari Ogawa in 3:02. The match was to decide the vacant GHC Junior Heavyweight Tag Team Titles. (The belts were held up on the 5/9/20 show when HAYATA turned on YO-HEY in a match vs. Yoshinari Ogawa and and Kotaro Suzuki which ended in a no-contest with Harada and Tadasuke getting involved).  confusion). YO-HEY and Tadasuke asked the referee to restart the match and let it continue to decide the new champions.

Yoshinari Ogawa and HAYATA best YO-HEY and Tadasuke to win the vacant GHC Junior Heavyweight Tag Team Titles in 16:29 when HAYATA pinned YO-HEY after The Headache.