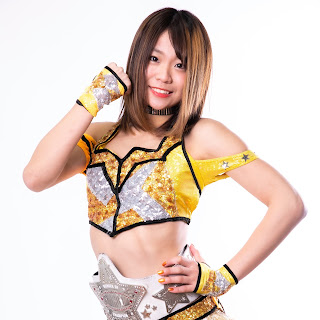 Wonder of STARDOM Champion Arisa Hoshiki announced today that she is retiring due to head and neck injuries. The title is now vacant. She stated that she has not been feeling well physically and mentally for about a year. She said she has felt out of balance, and after talking with doctors and STARDOM management, the decision was made to retire.

Hoshiki made her in-ring debut in 2011 then left STARDOM, and pro wrestling in general, in 2012 to pursue a music career. A couple of years later she started training for shoot boxing. She only had a couple of bouts in 2014 ending up with a 1-1 record. After a several years absence, she returned to STARDOM in 2018 with a decent push.

She won the Cinderella Tournament on 4/29/19 pinning Konami in the finals after the Brazilian Kick. She challenged the then Wonder of STARDOM Champion Momo Watanabe for the title as her “wish” for winning the tournament. On 5/16/19, she won “The White Belt” from Watanabe after the Brazilian Kick for the pin. She was champion for a little over a year.