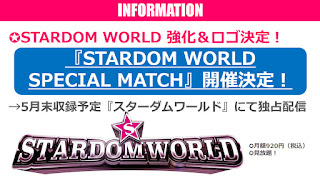 STARDOM held a press conference today. They announced all of their May shows have been canceled because of the virus pandemic. Ticket sales for June and July are currently postponed.

There will be a special no fans show to be held at the end of May that will air on STARDOM World. The card and further details will be announced at a later time.

New Japan’s Toru Yano was there. He is going to be the special advisor of content for New Japan and STARDOM which will be broadcast YouTube this year.

World of STARDOM Champion Mayu Iwatani is now the director of merchandise and will be coming up with new ideas. (Many of the joshi groups have been doing live stream autograph signings on YouTube in an effort to bring in some money for themselves and their companies with not being able to have fans buying live event tickets).