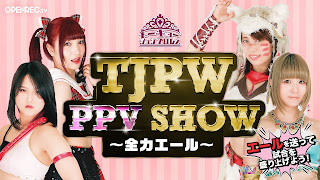 This is the first ever ppv show for the company. It will be available to watch on VOD until 6/16/20 and then it moves to WRESTLE UNIVERSE at the end of June as VOD. The company has been on hiatus since 4/3/20 because of the virus pandemic.

Miu Watanabe, Hikari Noa, and Raku start things off with a couple of songs.

Yamashita got the pin after a roundhouse kick in 7:57. This was mat-based grappling for the first six minutes until Maiumi charged Yamashita in the corner and managed to deliver a back suplex.

The ring crew will be disinfecting the ropes and the mat between matches while Namba does the interviews.

Tenma pinned Neko after the Kill Switch in 10:02 as Kamifuku and Aino were brawling on the outside. Tenma used Aino as a springboard during the match to give Neko a crossbody press.

Misao got the pin after her driving elbow finisher in 7:40. Misao is doing a gimmick where she says she’s a producer looking for a new star.

Noa got the pin after the uranage throw in 6:30.

Itoh won the fall over Harajuku in 8:27 after a DDT followed up by the Itoh Special Submission. Good match. Itoh gave Shirakawa a fall away head butt as Shirakawa had Harajuku in surfboard hold. She convinced Harajuku to help her double team Shirakawa then off course kicked her off the ring once they got the advantage. Itoh gave them both a DDT at the same time then locked them in a half crab each at the same time. Shirakawa hit Harajuku with a Thez Press for a near fall that was broken up by Itoh. Harajuku later broke up Itoh’s pin attempt on Shirakawa.

Watanabe pinned Raku after the Tear Drop in 11:42.

Shoko Nakajima and Suzume vs. Princess of Princess Champion Yuka Sakazaki and Mizuki

Sakazaki pinned Suzume after the Magical Girl Splash in 8:50. Sakazaki and Mizuki cut a promo after the match. They said it was the first ppv of the company and things were slowly getting back to normal. Sakazaki said they may do more ppv in the future. They said crowds will be let in for the 6/13 show at Itabashi Green Hall and 6/20 at Shinkiba 1st Ring.

There was a brief intermission to reset as the roster will be doing a signing of the event poster for those who bought the more expensive ppv packages. They are only available for Japanese residents due to the post office situation with the virus. Fans in other countries will receive a digital poster and a digital pic of a roster member.

They announced the Itabashi Green Hall show will only allow 82 fans. The crowd will have to wear masks and sit spaced apart for social distancing. Shinkiba 1st Ring will allow 100 fans.