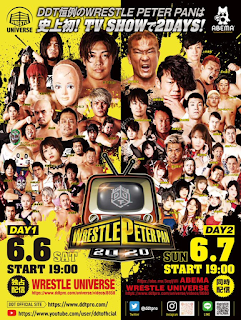 Keisuke Ishii and HARUKAZE vs. Hiroshi Yamato and Saori Anou

Jun Akiyama and Mizuki Watase vs. Yuki Iino and Akito

Konosuke Takeshita vs. Yoshihiko (the blow up doll) in a Last Man Standing Match

Naomichi Marufuji and HARASHIMA vs. MAO and Asuka

I’m behind schedule because of so many shows that took place in Japan over the weekend. Here are DDT “DDT Show #5” results that took place on 5/30/20 on WRESTLE UNIVERSE. This was the go-home show for Wrestle Peter Pan  https://www.ddtpro.com/universe/videos/8655

Antonio Honda beat Ironman Heavymetalweight Champion Danshoku Dino by Disqualification in 8:11 when Dino gave the referee a low blow and started stomping him. Makoto Oishi ran in immediately after the match and gave Dino and the referee stunners.

Daisuke Sasaki and Soma Takao beat Shunma Katsumata and Yuki Iino when Takao pinned Iino after a running elbow in 13:18.

Daisuke Sasaki was attacked by Shunma Katsumata while he was doing an interview backstage. Katsumata dragged him back to the ring and hit him with a chair and then gave him a pedigree on a pile of chairs covered in Legos.

Konosuke Takeshita and Akito beat Yoshihiko and Akihiro (the blow up dolls) in 9:35 when Takeshita ripped off Akihiro’s arm and the referee stopped the match.

Kenoh and his stable from NOAH came to the ring and he demanded that DDT and NOAH president Sanshiro Takagi come out. Takagi came out and Kenoh told him that he fears DDT is trying to take over NOAH. He demanded Takagi resign from NOAH. Takagi said Kenoh could try to make him step down and this all set up the match for Wrestle Peter Pan.