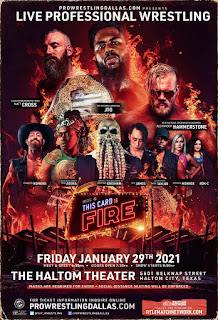 VIP Wrestling/Pro Wrestling Dallas results of “This Card Is Fire” from Haltom City, Texas, USA 🇺🇸 at The Haltom Theatre on 1/29/21 live on Title Match Network:

Nigel Rabid is the play by play announcer.

Heather Monroe pinned Killa Kate after a thumb to the eye followed by the Michinoku Driver.

Will Allday pinned Lou Gotti after a reverse hurricanrana and super kick when interference by Nastico (the heel manager of Gotti) backfired.

Alejandra The Lion pinned Rok-C in a No Disqualification Match after a face plant on a chair when Nastico (The Lion’s manager) ran down and interfered. At one point in the match a big can of Twisted Tea was used as a weapon.

Chandler Hopkins pinned Matt Cross with an inside cradle after both guys couldn’t put each other down with shooting star presses.

Shane Taylor pinned Izzy James after a knockout punch and the package piledriver in a #1 con. match for the VIP Title.