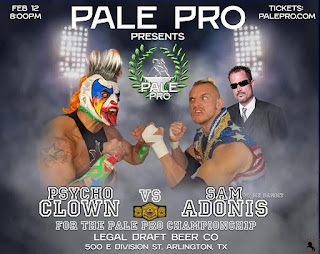 Prince Ahmed and Gideon Vain beat Adorable Eddie and Wildcard in the dark match. (Thanks to Title Match Network for the results)...

Brittany Nikole and Nigel Rabid are the broadcast team.

Chandler Hopkins pinned Mecha Wolf after a shooting star press. A real hot opener for live TV with tons of fast paced and high impact action. Hopkins had bruises and red marks all over his back.

Gino Medina pinned Isaiah Broner with an eat defeat followed up by a roll up. Broner is a longtime regular on the Detroit indie scene for groups like XICW and Pro Wrestling All-Stars. He’s also made appearances in OVW.

Niles Plonk agreed to a beer chugging contest with Magnificent Malico to the song “Yakety Sax” (best known as the theme song of the classic comedy variety show “The Benny Hill Show”). Plonk started getting sick after downing a few cans of beer. Malico was able to finish the challenge and won the contest. Plonk attacked him like a sore loser and threw him in the ring. It wasn’t a match, they had a comedy “drunk brawl”. Plonk eventually just gave up and escaped the ring to walk to the back acting like he was going to be ill again.

Nobe Bryant pinned Beastman Husk after an axe kick when Husk missed a flying move off the ropes. MK was the heel manager of Husk and they got into an argument with each other after the loss.

Myron Reed pinned Ryan Justice after a low blow followed up by an Emerald Flowsion. After he match, Reed continued to attack until Will Allday ran out and made the save. Allday laid Reed out with a super kick. They will face each other at Independent Wrestling Expo 3 on 3/13/21 in Fort Worth, Texas. It will be available on FITE.

Reality Of Wrestling Heavyweight Champion Cam Cole pinned Mike Bennett by using feet of the ropes. Really strong back and forth match.

PPW Champion Sam Adonis pinned Psycho Clown after a low blow in a No Disqualification Match when MK (Adonis’ manager) ran in and attacked a second referee to become the third referee. He gave a fast three count and went to the back with Adonis. The first referee was bumped earlier in the match. Clown and Adonis both bled and Adonis’ face was a real mess. Long match that saw Adonis give Clown a spear into a door set up in the corner of the ring, then Clown gave him a Spanish Fly through a board set up between two chairs in the ring near the finish.