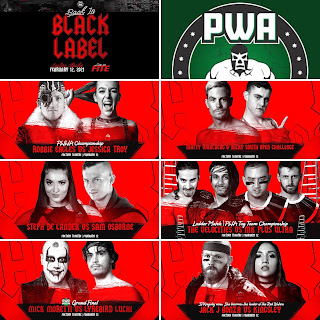 Pro Wrestling Australia “Back In Black Label” results from Sydney, New South Wales, Australia 🇦🇺 at The Factory Theatre on 2/12/21 live on FITE:

Robbie Eagles beat PWWA Champion Jessica Troy by Disqualification when Charli Evans interfered and pushed him off the top rope. Evans then went on to turn on Troy, who has been her longtime friend and tag team partner, with a super kick. She wants the title from Troy. Evans and Troy were known as The Blue Nation. They held the PWWA Tag Team Titles last decade and were regulars in American companies like SHIMMER and RISE.

Bel Pierce and Unsocial Jordan beat Shazza McKenzie and Big Fudge when Jordan pinned McKenzie after a spear from Pierce.

Kingsley beat Jack Bonza by half crab submission to gain control of The Red Nation.

Mark Davis and Kyle Fletcher beat Ricky South and Matty Walhberg in an Open Challenge Match by pinning Walhberg after a double team finisher when Walhberg accidentally collided into South.

Billy Preston vs. Jimmy Townshend was a movie match that took place on a playground. A slide, swings and other playground equipment were used in the action. It was an apparent No Contest. Townshend said he didn’t  think things were working out Preston walked away as they looked back at each other with respect.

Lyrebird Luchi won the inaugural PWA Premiership over Mick Moretti in the finals of a tournament. A bunch of guys dressed as clowns came in to cause distractions for the referee. Matty Walhberg was among them dressed like a clown and he attacked Moretti for Luchi to get the pin.

Charli Evans won a 4-Way Match over Mat Diamond, Will Kiedis, and Rhys Angel by pinning Diamond after a lariat.