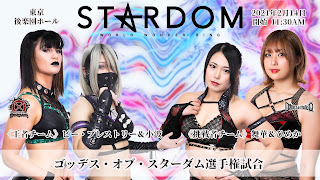 Mayu Iwatani pinned Unagi Sayaka with a Dragon Suplex in 12:54.

AZM and Mei Hoshizuki beat Starlight Kid and Saya Iida when AZM pinned Iida with the Azumi Sushi in 11:06.

Himeka and Maika won the Goddesses Of STARDOM Tag Team Titles from Bea Priestley and Konami when Himeka pinned Priestley with an inside cradle as Priestley tried to hit the Bea Trigger in 21:46. Natsuko Tora and Saki Kashima came out to challenge the new champions for the 3/3/21 show.