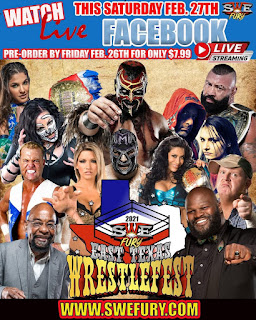 The show started in progress after 8pm EST as Christi Jaynes retained her SWE Women’s Title by pinning Malia Hosaka. Hosaka jumped her after the match as she was celebrating her win. Rosemary then ran in the ring and started attacking Jaynes as well. Hosaka apparently didn’t appreciate the help. She and Rosemary ended up getting into a big pull apart brawl.

“Moonshine” Ryan Mantell came out wearing an eye patch. He said he had a score to settle with Max Castellanos but he didn’t show up. He said he wants it to be a bull rope match. Teddy Long came back out and said the match will happen on the next show because Castellanos isn’t there tonight. He told Mantell he could suspend him with the way he was carrying on, and if that happened, he wouldn’t get the bull rope match stipulation. Mantell calmed down and left the ring to avoid suspension and let the show continue.

Action Jackson pinned Andrew Anderson when The BoogeyMan chased Nigel Rabid (Anderson’s manager) into the ring to cause a distraction. When the referee wasn’t looking The BoogeyMan punched out Anderson for Jackson to get the cover and the win.

SWE TV Champion Rodney Mack won a gauntlet match over three competitors not named by the announcers. It was hard to hear their ring introduction over the music and crowd noise. Mack beat all three one at a time by Cobra Clutch submission that he calls The Euthanaiser.

Charlie Haas came out with his manager Nigel Rabid and his lawyer. He demanded Teddy Long come out. They argued about a controversial title decision vs. Tim Storm from previous tapings that ultimately ended up with Haas getting arrested and suspended. Haas threatened to sue SWE and Long over it. Long said he wanted to avoid getting hit with any legal action. He had James Beard come out with the SWE World Title. Beard gave the title back to Haas and Long reinstated him back into action.

Adam Asher came to the ring and called out Niles Plonk.

Niles Plonk beat Adam Asher by Disqualification when Asher used a knockout punch out of frustration right in front of the referee. Closed fists are illegal in SWE.

Teddy Long came out again and introduced Mark Henry. (Henry is a scout for WWE). Long said Henry will be part of SWE behind the scenes.

Trevor Murdoch came out next with the NWA National Title and he was acknowledged as the champion by Long. Murdoch said it was good to be back in Texas and to be in front of people again. He said he wanted to defend the title tonight and told Long to find him a challenger for later.

Davey Boy Smith Jr. pinned Matthew Justice after the powerslam. Justice got some big offense in at the end by hitting a running spear through the ropes and a frog splash. When he tried for a second frog splash Smith recovered and grabbed him off the top rope for the finish.

Miranda Gordy pinned Amber Nova after a powerslam by catching Nova in the air and she did a flying crossbody. As “Wrestling... with Demons” reported earlier tonight, Gordy recently had a WWE tryout.

Tim Storm came to the ring and gave a fiery promo. He complained about Charlie Haas getting awarded the SWE World Title despite feet being under the ropes in the finish of their match at the previous tapings. He warned Teddy Long that the situation brought out a new a different side of him that people aren’t going to like now.

The BoogeyMan pinned DJ Michaels after a chokeslam. He stuffed the worms into Michaels’ mouth after the match.

James Beard came to the ring. He said he was inducting another person into the SWE Hall of Fame to join Jazz and Kerry Von Eric. He said everyone so far has been personal to him because they were his friends. Tonight, Terry Gordy gets inducted. Miranda Gordy came out to accept for her late father. Beard said he was there to help induct Terry into other wrestling Hall of Fames and it was hard to keep it together. He said Terry was a good friend and he misses him.

SWE Women’s Champion Christi Jaynes came out and interrupted. Jaynes said Terry Gordy was pioneer and tag team specialist. Miranda said the moment wasn’t about him, it was about her. Jaynes arrogantly posed and taunted Gordy. Gordy was going to hit her over the head from behind with the Hall of Fame plaque but the referee quickly took it away from her. It set up an impromptu Women’s Title Match.

SWE Women’s Champion Christi Jaynes beat Miranda Gordy by Disqualification when Gordy did end up using the Hall of Fame plaque as a weapon to hit Jaynes in the face. Gordy continued the beat down after the match. Lacey Von Erich, the daughter of Kerry Von Erich, ran in to make the save and she gave Gordy the Iron Claw. The announcers hyped up that the Von Erich vs. Freebird feud continues in 2021 with the daughters.

Blood Hunter pinned David Boy Smith Jr. with a low blow and cradle when Melina interfered and pulled Hunter’s foot on the rope to break up the pin as Smith had Hunter covered after the powerslam.

Mission Pro Wrestling noted that MPW Champion La Rosa Negra pinned Myka Madrid after the frog splash but it was not televised. The show started at 7:30pm EST but did not begin airing live on Facebook Watch until after 8pm EST.