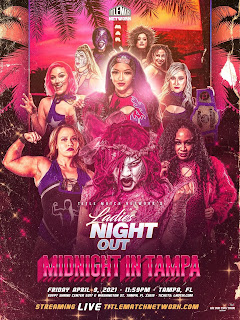 Title Match Network announced that they will be having a Ladies Night Out event in Tampa, Florida 4/9/21 at 11:59 pm. EST. Because of the special start time, the show is being called “Midnight In Tampa”. It will be held at the Egypt Shine Center and broadcast live around the world on the Title Match Network itself.
Names announced so far are: Su Yung, Jordynne Grace, Keira Hogan, JennaCide, Allie Kat, Heather Monroe, Holidead, Harlow O’Hara, Faye Jackson, and Alejandra the Lion.
I was told that a women’s legend will also be appearing on the show and the official announcement should come in a week or so.
Tickets for the show are here: http://lnotix.com/
Title Match Network is here: https://titlematchnetwork.com/?fbclid=IwAR0J-m8rMmRDXOrX6HRNnK0Q0Oxw3UBN11cvdV6e6GJEh_zW9OXluMVf0Ug