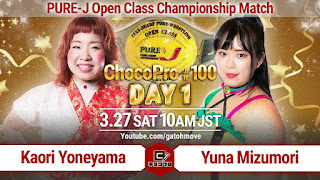 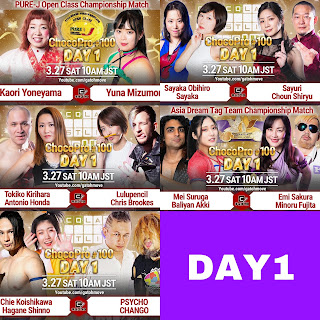 Asia Dream Tag Team Champions Mei Suruga and Baliyan Akki beat Emi Sakura and Minoru  Fujita when Suruga pinned Sakura after a double team finisher. The match went nearly 30 minutes. Suruga immediately left the building to head over to Shinkiba 1st Ring where she will appear for Tokyo Joshi Pro Wrestling’s event as her alter ego Mei Saint-Michel. Akki also left as he will be on the ZERO1 show later.

Sayuri and Choun Shiryu beat Sayaka Obihiro and Sayaka when Shiryu pinned Obihiro after a diving stomp out of the sliding window.

Pyscho and Chango beat Chie Koishikawa and Hagane Shinno by pinning Shinno after a fireman carry/rolling neck breaker double team finisher. It looked like Chango sprayed Shinno in the face with hairspray before the end as she was standing in the window.

Antonio Honda and Tokiko Kirihara beat Chris Brookes and Lulu Pencil when Honda pinned Pencil after poking her in the eyes and rolling her up with an inside cradle.