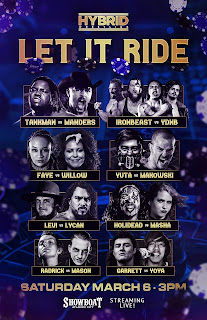 Hybrid Wrestling “Let It Ride” results from Atlantic City, New Jersey, USA 🇺🇸 at The Showboat on 3/6/21 free and live on YouTube:

JJ Garrett pinned Yoya after a moonsault to the back followed up by turning him over to deliver a big top rope splash. Fast paced and a real physical opener. Garrett was bleeding from the mouth after getting hit with a kick.

Willow Nightingale pinned Faye Jackson after a DVD followed up by a moonsault. Kris Levin, one of pro wrestling’s biggest workaholics (and nicest guys), was the referee.

IronBeast (Shane Mercer and KTB) beat Young Dumb And Broke (Charlie Tiger and Ellis Taylor) by pinning both guys at the same time.

Holidead pinned Masha Slamovich after a body buster finisher on a chair laying in the ring.