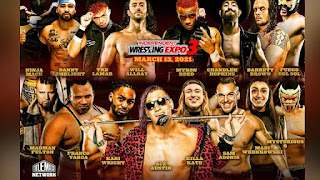 Independent Wrestling Expo 3 from Fort Worth, Texas, USA 🇺🇸 at The Rail Club Live on 3/13/21 live on Title Match Network:

Ace Austin and Kari Wright cut promos on each other to open up the show to build up their match for later on.

Will Allday pinned Warren J after a super kick in a 1st Round Flightweight Tournament Match.

Moonshine Mantell and Bam Bam Malone beat Chavy Chulo and Mathayus by piling up to pin both guys at the same time.

Will Allday pinned Tre Lamar after the super kick in a 2nd Round Flightweight Tournament Match.

Killa Kate beat Mia Friday by arm bar submission. Good match that started off with fast reversals and chain wrestling then transitioned into explosive moves. Kate is a rising indy star. Friday is an impressive 15-year-old newcomer who was trained by The Lions Den in Bryan, Texas.

Pale Pro Wrestling Champion Sam Adonis used his feet on the top rope to pin Mad Man Fulton. Good match that was a mix of a brawl and wrestling.

Ace Austin pinned Kari Wright after The Fold with big help from Mad Man Fulton. They were brawling on the stage and Mad Man Fulton came out to attack Wright and help Austin. Fulton picked Wright up in a military press and threw him from the stage back into the ring for Austin to hit his finisher.

Myron Reed won the Flightweight Tournament pinning Will Allday in the finals.