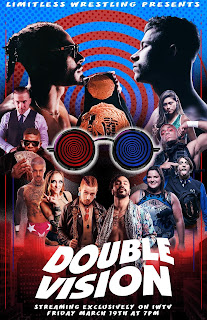 If you’re a new subscriber to IWTV you can enter the code LIMITLESS for a free trial to watch this show.

Mac Daniels beat Love, Doug. (This was a pre-show match a little before 7pm EST. I tuned in late and didn’t see the finish)..

Kevin Blackwood won a 3-Way Match over Charles Mason and Ken Broadway by submission on Broadway.

Becca pinned Ashley Vox after a spin kick. Becca does a gimmick where she’s the leader of a group called The Scrunchie Squad. Vox confronted Becca during the backstage interview afterwards and wanted to know who other members where because it only seems to be Becca alone. Becca said she has members all over the world. Vox said she and Delmi Exo want to face Becca and another Scrunchie Squad member to a tag team match in the future.

There was a farewell video for Christian Casanova. He has signed with WWE and this is his last Limitless Wrestling event.