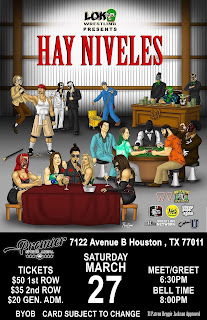 Reggie Jackson vs. Papa Dingo ended ambiguously. Dingo was about to clobber Jackson with a chair but Lowrider ran out and made the save and gave Dingo a few chair shots. Dingo gave up the fight and walked to the back in frustration. The referee was gesturing but no official announcement was made. It made it look like either Jackson won by count out or Dingo won by Disqualification because of Lowrider getting involved. Lowrider raised Jackson’s hand to the crowd as the announcers debated what the results was too.

Chris Carter pinned Malcolm Monroe III after a 450 senton. Good match. The referee was bumped accidentally for most of it by a kick from MM3. They brawled around the venue and Carter gave MM3 a big flying body press off the balcony area. MM3 is a regular in Detroit’s XICW. He is the son of XICW owner/wrestler DBA and the grandson of the late Malcolm Monroe who was a wrestler for Detroit’s Big Time Wrestling. Malcolm Monroe would later promote shows of his own after Big Time Wrestling closed under the banners Midwest Championship Wrestling and Insane Championship Wrestling. Lots of people in Michigan got their start in pro wrestling thanks to the Monroe Family.

Mecha Wolf 450 pinned El Cuervo after a 450 Splash. This was a hardcore match with doors and chairs used as weapons. They bumped a couple of referees during it.

Gino Medina pinned Hijo De Canis Lupus after a chair shot to the head during a ref bump.

Sadika won an Ambulance Match over Zeuxis after a spin kick and forcefully rushing Zeuxis into the back of the ambulance and shutting the doors.