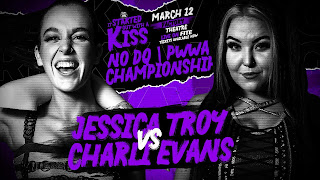 Pro Wrestling Australia Black Label results of “It Started With A Kiss” from Sydney, New South Wales, Australia 🇦🇺 at The Factory Theatre on 3/12/21 live on FITE TV:

Kyle Fletcher and Mark Davis beat Jack J. Bonza and Mick Morreti when Davis pinned Bonza after a double team finisher. Fletcher got on the mic after and said they want a tag team titles shot against Velocities. 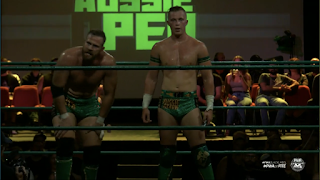 PWWA Champion Jessica Troy beat Charli Evans in a No Disqualification Match by arm bar submission. Troy jammed wooden spikes into Evans’ forehead then stomped on her hand into a pile of thumbtacks following up by wrapping her arm with barb wire for the tap out. Evans head was bloody at the end. Good match. Evans tossed in over a dozen chairs and made a pyramid out of them. She tried to slam Troy through it off the top rope but Troy reversed it and gave her a superplex right on top of it. Troy brought in the bag of thumbtacks and spilled them in the ring. Evans gave her a backdrop suplex into them. Troy recovered and gave Evans a brain buster into the tacks. Troy went to check on Evans after the match and they hugged in an apparent reunited friendship. 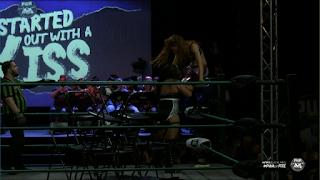 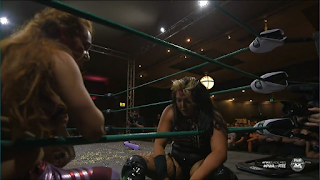 Sam Osborne beat Punch Drunk Istria by knee bar submission. Irstria did reach the ropes to try to break the hold but Osborne’s manager Don Marnell slapped his hands off the rope when the referee wasn’t looking. 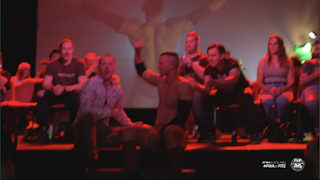 Ricky South won the PWA Heavyweight Title from Caveman Ugg after a piledriver, lariat, and a couple more piledrivers for the pin. Lots of chaos and suspense in the closing moments as the referee was bumped then Ugg beat up the second referee out of frustration when it looked like he was about to win but South got his foot on the rope at the last second to break up the pin. 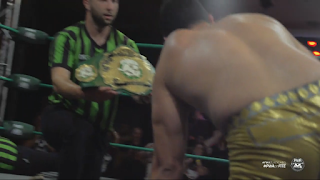 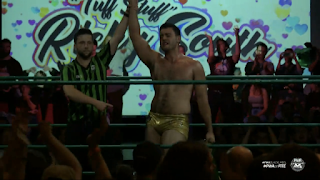 Intermission- the 30 person Rumble is the main event. Two people start off with a new competitor entering every couple of minutes. Over the top rope rules for the eliminations. The winner gets a title shot at any title.

Matty Wahlberg and Mick Moretti are the first two in the ring.

Lyrebird Luchi #3. He immediately played cowardly when Moretti and Wahlberg tried to go after him and slipped under the ropes to avoid the match but not eliminate himself.

Moretti and Wahlberg eliminated Braxton then went back to fighting each other.

Luchi came back into the match briefly then slipped under the ropes again.

Bonza eliminated himself after saving Kingsley from elimination.

Unsocial Jordan #19. He cut a promo challenging Ricky South for the title.

Luchi eliminated De Lander, Cherry, and a couple of others then slipped back under the ropes.

Pierce and Jordan eliminated by London and De Silva.

Jack Pain and Backman eliminated by London and De Silva.

Osborne won the Rumble after eliminating Wahlberg and Moretti as the were fighting with each other on the apron. It looked like Osborne was eliminated earlier but the referee didn’t see it.

Ricky South came out to face off with Osborne. Osborne said “what’s makes you think I’m challenging you?” as a tease he wants to face Jessica Troy for the PWWA Title. 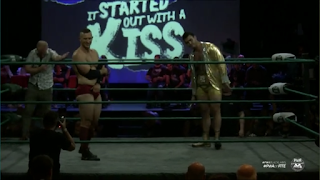