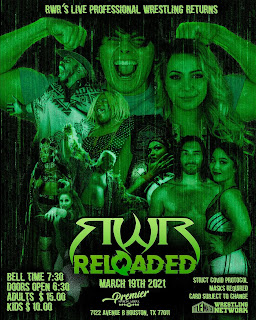 It been over a year since RWR has had a show because of the virus pandemic. Some of the titles are vacant.

Tommy Bolton pinned Oday after a swinging reverse slam to win the Fusion Division Title. There was only a 10-minute time limit to win the match.

Jay Davis went to a Double Count Out with Bryan Keith. They brawled in the ring afterwards. Keith gave Davis a super kick then Davis returned fire with a spear.

RWR Chairman Scott Bruce came out and ordered the match restarted and with the vacant Renegade Title on the line. Bruce ended up being the referee.

Eddie Lee won a 3-Way Match over Johnny Reed and John Justice by submitting Justice to a inverted leg lock. Reed got on the mic after and said he was retiring.

Claudia Del Solis came out to the ring for an interview. She said someone wasn’t there tonight. It was Alejandra The Lion. Del Solis shamed her for not even coming to the show to do a promo. It teased a future match between the two.

The Good Housekeeping Death Match with Izzy James vs. The Insidious One ended in a No Contest Double Knock Out. The Insidious One tried to suffocate James with a garbage bag but James hit her over the head with a bottle for the finish. They used a mop, broom, cat litter box, and an ironing board as some of the weapons. At one point James got Insidious One in a arm bar and used an electric razor to shave one of her arm pits.The two are a couple in real life.

Queen Aminata pinned Super Oprah after a diving shooting senton. Oprah broke part of the top rope earlier on in the match while trying to cannonball Aminata in the corner.

Jenna Lynn pinned Joe Alonzo after her karate kick finisher when Super Oprah ran down to stop Alonzo from using a chair while the referee was bumped. Lynn accidentally laid out the referee with a karate kick instead of Alonzo. This was pretty entertaining and they built it up on social media for a few months. Alonzo played the cocky “pretty boy” heel teasing Lynn in videos about women’s wrestling and intergender wrestling. Lynn said she would stand up to bullying and defend all women. Her mouth was a bloody mess in the match. I could see both of them getting signed to a big company eventually. Alonzo “has the look” and Lynn is one of the most popular stars on the Texas indie scene with her Karate Kid/Hong Kong Phooey gimmick and tons of expression in her face.