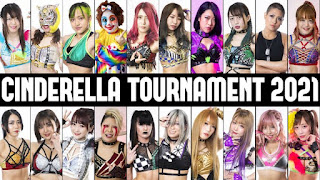 STARDOM results from Tokyo, Japan 🇯🇵 at Korakuen Hall on 3/26/21:

NatsuPoi won a 3-Way Match over Gokigen Death and Lady C by pinning Lady C after the Backlash in 4:49.

Maika and Himeka beat Utami Hayashishita and Hina when Himeka pinned Hina after a JP Coaster in 11:17.

Mayu Iwatani, Starlight Kid, and Hanan beat Natsuko Tora, Saki Kashima, and Rina when Hanan submitted Rina with an atm bar in 13:13. The STARS and Oedo Tai teams stared each other down afterwards to tease their Elimination Match on the 4/4/21 pay-per-view. The last person in the match to lose the fall has to join the other unit as a member.

Giulia and Syuri beat Bea Priestley and Konami when Syuri pinned Konami after a Buzzsaw Kick in 17:43. Giulia and Syuri talked about their match against fellow Donna Del Mondo members Maika and Himeka for the Goddesses of STARDOM Tag Team Titles on 4/4/21.

Artists of STARDOM Champions Tam Nakano, Mina Shirakawa, and Unagi Sayaka beat Momo Watanabe, Saya Kamitani, and AZM when Nakano pinned Watanabe after a Tiger Suplex in 20:35. NatsuPoi got in the ring after the match. She and Nakano grabbed each other by the hair to build up Nakano defending the Wonder of STARDOM Title against her on the 4/4/21 event.

They announced the Cinderella Tournament 2021 which will take place at Korakuen Hall spread out over two days this year on 4/10/21 and 4/30/21. Here are the names scheduled to compete: