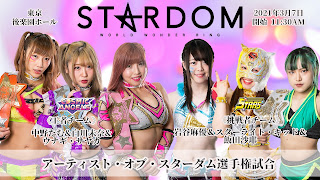 STARDOM results from Tokyo, Japan 🇯🇵 at Korakuen Hall on 3/7/21:

This is the fallout event after the 3/3/21 pay-per-view which saw Giulia lose the Wonder of STARDOM Title and her hair to Tam Nakano in the hair match main event. Due to the loss, Giulia said she wanted to compete in the opening match on today’s show.

Giulia came out with totally new ring gear reminiscent of Sigourney Weaver’s Ripley character in the “Alien” movie franchise. She was wearing a Yankees baseball cap then took it off to reveal the short hair cut. She pinned Gokigen Death with a back drop suplex in 3:03. 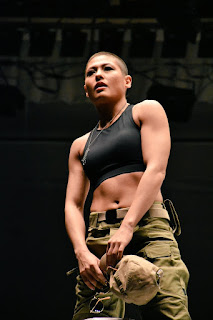 Konami pinned Lady C after a Buzzsaw Kick in 5:21.
Momo Watanabe, AZM, and Saya Kamitani won a 3-Way Elimination #1 con. Elimination Match for the Artists of STARDOM Titles over Himeka, Maika, and NatsuPoi... Natsuko Tora, Saki Kashima, and Ruaka when Kamitani pinned Kashima with the Star Crusher to win in 11:22. AZM eliminated Tora by Over The Top rule. NatsuPoi eliminated Ruaka. AZM and NatsuPoi got eliminated by Over The Top rule. Kashima eliminated Himeka, Watanabe, and Maika.
Bea Priestley won a 3-Way Match over Utami Hayashishita and Syuri by pinning Hayashishita with the Queen’s Landing in 11:06. Priestley will face Hayashishita for the World of STARDOM Title on 4/4/21.
Artists of STARDOM Champions Tam Nakano, Mina Shirakawa, and Unagi Sayaka beat Mayu Iwatani, Starlight Kid, and Saya Iida when Nakano pinned Kid with a Tiger Suplex in 20:59. Their defense against Watanabe, AZM, and Saya Kamitani will take place on 3/26/21 at Korakuen Hall.
Mina Shirakawa and Unagi Sayaka challenged Himeka and Maika for the Goddesses of STARDOM Tag Team Titles.
Thanks to Tomi Yamada for sending in the results.“Wrestling... with Demons” wouldn’t be able to bring results as soon as possible of many events not streaming live like this if it wasn’t for her help over the last few years.