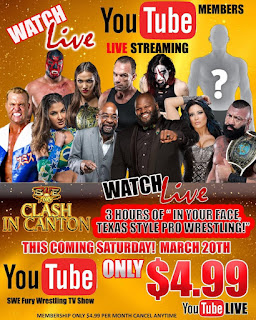 I haven’t had a chance to see the SWE Fury “Clash In Canton” event from 3/20/21 because of so much other pro wrestling coverage from around this weekend, but W.W.D. did get some news about it from SWE officials this afternoon.

The Blood Hunter and Gangrel were the final two left in the battle royal to determine a new Texas Heavyweight Champion. They then faced off in a singles bout for the gold. The Blood Hunter defeated Gangrel to win the vacant title. The Blood Hunter is managed by Salina De La Renta and he “sacrificed her” with a powerbomb on Gangrel through a table to help win the match.

SWE Fury did confirm W.W.D.’s report last night that they will be adding a Women’s TV Title in the future.

The next show is 4/24/21 in Irving, Texas at The Southern Junction.

You can watch a few of the highlights from last night on The Hannibal TV courtesy of SWE Fury.