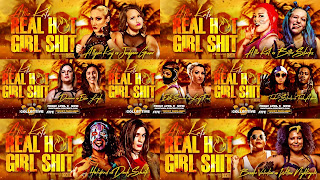 Davienne pinned Erica Leigh after giving her a running drop kick up against the ring post.

Willow Nightingale pinned Brooke Valentine after a pump handle slam followed up by the moonsault.

Tasha Steelz pinned Trish Adora with a Falcon Arrow. Kiera Hogan was at ringside with Steelz and they both had their Impact Wrestling Knockouts Tag Team Titles belts with them.

Allie Kat beat Billie Starkz by arched Boston Crab submission. This was another good showcase for Starkz who got in a lot of offense and looked like a competitive fighter in the loss.

Faye Jackson came out to introduce the Grey Sweatpants Battle Royal. She had her arm in a sling because of the dislocated elbow. She gave  away an award to 2 Cold Scorpio (who couldn’t be there) and to the late Shad Gaspard.

The winner of the battle royal gets a trophy and a Fleshlight. Jackson said she really didn’t even care about the rules of it.

Tasha Steelz is on the broadcast team for the main event. The announcers said that Chris Bey was supposed to be in this but he’s injured.

JTG won it by eliminating Daniel Garcia last. Ice Williams, Keith Mack, Devon Monroe, Mr. Darius Carter, Montana Black, KC Navarro, Mysterious Q, Ricky Shane Page, Lee Moriarty, Funnybone, Suge D, Eel Oneal, Jazz, and a few others (it was hard to hear the introductions over the music). Steelz was funny on commentary with her horrified reaction that her brother KC Navarro was in this and wearing the sweatpants.

Jackson told JTG to take off the grey sweatpants so they could be auctioned off for charity. The roster was giving Jackson a send off as the show went off the air. She said she’s retiring after this weekend.