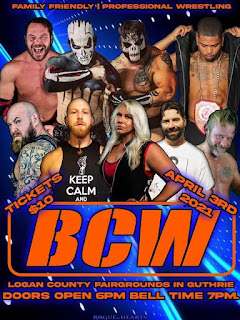 Reggie Lincoln pinned Father Padge after run in interference from an unknown masked man attacked Padge while the referee was distracted by Padge’s heel manager on the ring.

Funnybone and Superbeast beat BCW Twg Team Champions Niles Plonk and Dexter Hardaway in a non-title match when Funny Bone pinned Hardaway after the diving double stomp and Superbeast pinned Plonk with a powerslam at the same time.

Buzzsaw Champion Revan won a 3-Way Match over Duke Cornell and Drake Gallows by pinning Gallows after throwing dirt in his eyes followed up by a choke slam.

Curt Gannon beat Steve Tresario by referee stoppage. Gannon hit him with a kendo stick shot when the referee was briefly bumped and applied a submission hold. The referee woke up and saw Tresario was unconscious while in the hold and declared Gannon the winner.