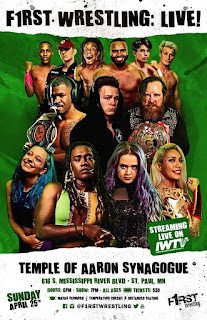 F1RST Wrestling results of Show 1 of a double header from Saint Paul, Minnesota, USA 🇺🇸 at Temple of Aaron Synagogue on 4/25/21 live on IWTV:

Dante Martin won a 3-Way Match over Don’t Die Miles and Cole Radrick by pinning Radrick after a 450 Splash.

Rylie Jackson pinned Jordan after a poke in the eyes and a backlash when the referee was shoved out of view.

Devon Monroe vs. Uptown VFW Champion Arik Cannon went to a no-contest when the referee was accidentally bumped then Darin Corbin ran in and attacked both guys. He cut a cocky promo bragging that nobody would stop him now. Thunderfrogger then came out and gave Corbin a big slam. He was going to follow up with a top rope move but Corbin ran out of the ring.

The Carver pinned Kal Creed after a curb stomp. After the match, he was going to put Creed in a body bag but Rylie Jackson ran out and threw a tire at him and put a stop to it.

The women will be the main event for this day show. Show 2 starts at 8pm EST back on IWTV.

Blair Onyx won a 4-Way Match over Billie Starkz, Hyan, and Trish Adora by pinning Starkz after a Sister Abigail finisher while Hyan and Adora were outside down on the floor and couldn’t break up the cover.