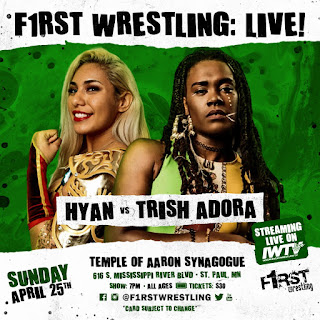 F1RST Wrestling results of Show 2 of a double header from Saint Paul, Minnesota, USA 🇺🇸 at Temple of Aaron Synagogue on 4/25/21 live on IWTV:

The Carver pinned Rylie Jackson after a curb stomp. The Carver tried to put Jackson in a body bag after but Jackson was able to kick him away and get out of the ring in time.

Dante Martin pinned StarBoy Charlie after a 450 Splash. Arik Cannon got in the ring and said Charlie will come back after these impressive performances.

The next show is on Thursday, June 10, 2021 back at the same venue with Colt Cabana, Allysin Kay, and Heather Monroe announced.

Hyan pinned Trish Adora with the Beauty Sleep in the main event. They hugged afterwards and Hyan walked out to let Adora have the ring to herself.