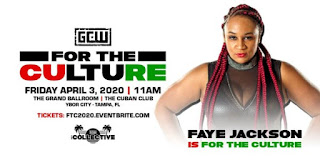 Independent pro wrestler Faye Jackson announced on her social media today that she has a dislocated elbow and will not be wrestling on any of her scheduled WrestleMania Week dates in Tampa, Florida. She suffered the injury against Dan Barry in the main event of the Terra Calaway Benefit Show on 3/28/21. The match was stopped because of it and the broadcast abruptly went off the air.

Jackson said her Grey Sweatpants Battle Royal will still take place. It’s part of Allie Kat’s “Real Hot Girl Shit” event on 4/9/21. She went on to say that she will step away from pro wrestling for good after WM Week. 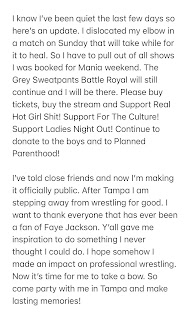