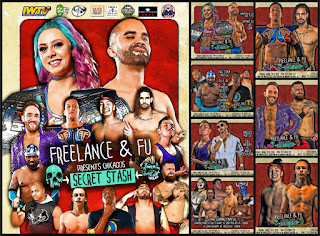 Freelance Underground Champion GPA pinned Laynie Luck by using feet on the ropes in a non-title match. A great fast paced intergender match that never let up. The announcers did note that the two wrestlers are a real life couple who live together and they constantly train together. Luck has always been open about it in interviews and social media.

Marshe Rockett and Acid Jaz beat Koda Hernandez and Darius Latrell when Hernandez was pinned after Latrell got mist spit in his face and sent him to the floor.

Freelance Legacy Champion Robert Anthony pinned Storm Grayson after a low blow and the Mandalorian Driver finisher when Frank The Clown interfered by throwing in the title belt to distract the referee who didn’t want it to be used as a weapon.