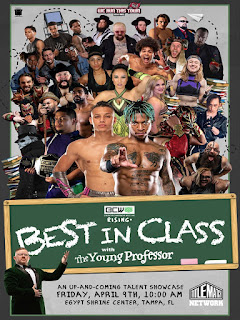 Leila Grey pinned T-Gainz after a double underhook face buster over the knee.

Kayden Greene and Ronnie Rios beat Sir Knight and Space Cowboy when Cowboy was pinned after a double team finisher.

Jake Painter pinned JC Vega after a frog splash. Skye Blue came out with Painter and they are a real life couple. Painter accidentally bumped the referee then Vega tried to use a mop as a weapon. Blue got in the ring took the mop away from Vega and she gave him a kick to lead to the finish. Blue tossed Vega out of the ring after the match.

Danny Vegas, Hezekiah Hoskins, and Jebediah Moss beat The Make Its when Moss pinned Izaiah Zane after a choke slam in a 6-man tag team match.

Janai Kai pinned Killa Kate after a spin kick when Nastico ran down to cause a distraction. Kai didn’t want Nastico’s managerial help so she kicked him when it was over. This was an excellent match. They tore the house down. It was worked like a Josh Barnett BloodSport MMA style of bout. Kai competed on the BloodSport show last night and had an impressive showing there in a loss against Karen Tran. If you like mat based wrestling these two matches are worth going out of the way to see.

Mr. King won a 6-Way Schoolyard Scramble Match to win the Defenders of Humanity Title over Captain Aaron Nova (the champ coming in), Izzy James, Ron Bass Jr., Rey Fury, and Speedy Ricky. The rules were it would go to the 15-minute time limit and there could be multiple falls to win the title during the match. Whoever had the most recent fall when time expired was the champion. Bass pinned Nova. Ricky pinned Bass. Nova pinned Ricky. James submitted Nova. Bass pinned James after a lariat. Fury pinned Bass after a frog splash elbow. Nova got the title back somehow. Mr. King pinned Nova to win the match and title. There were some buffering issues so I missed a fall or two towards the end.

Lio Rush pinned KC Navarro after a springboard cutter. After the match, Rush put over Navarro and they hugged. Navarro swerved him and laid him out. He said “F*uck You!” at Rush and stormed out of the ring in anger.