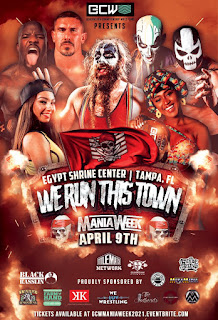 Moose beat EC3 by Disqualification after a low blow. EC3 then cut a lecturing promo to Moose while Moose laid on the mat in pain. It was basically a continuation of their angle from Impact Wrestling months ago. EC3 grabbed the TNA World Title and hit Moose with it to hardly no reaction from the crowd.

Logan Cruz pinned Daniel Starling after a discus punch with brass knuckles in a Street Fight. They used chairs, a kendo stick, chains, and a barb wire bat as the weapons. Neither guy bled and they were out there forever getting just about every spot they could think of in.

This show was delayed by an hour and ten minutes because of other promotions running in the venue all day. Any extra screwing around and promo time on this scheduled 12 match shows isn’t really needed or necessary. Ladies Night Out is still on deck to close out the evening and it doesn’t look like it will make its 12am EST start. We’ll be up all night for sure.

Renee Michelle pinned Missa Kate with her driving neck breaker finisher. Michelle did a corny gimmick where she brought a box of Dunkin’ Donuts to the ring to imply the stereotype that all pro wrestling fans are unhealthy fat asses. Kate turned her back to mess with the donuts to walk into the finish. After the match, Michelle tried to shove a donut in Kate’s face but it backfired and Kate caught her in the face with a custard donut.

Timmy Lou Retton pinned Mr. Grim after a moonsault into a double stomp. Retton pulled him up from the mat and hugged him as a show of respect after and then bowed to the crowd in a classy gesture. The fans were really into the match.

Remy Marcel won a 3-Way Match over Mecha Wolf 450 and Wolfe Taylor by pinning Mecha with a roll up and holding the tights.

GCW owner Mr. Gomez came out to talk to the crowd about the match for the vacant GCW Tag Team Titles coming up.

Malik Bosede and Eli Knight beat Edge Stone and Solomon Stone to win the vacant GCW Tag Team Titles when Bosede pinned Solomon Stone after their double team finisher. Edge turned on Solomon after the match and gave him a slam.

The announcers said Liv Morgan was hanging out visiting friends at the venue today.

Mike Bennett pinned KC Navarro after a spear and two pile drivers. Bennett got on the mic after and thanked the crowd for still coming out and spending money during these tough times. He said Navarro will one day be star and thanked him for the match. Navarro then got on the mic and said he looked up to Bennett and it was an honor. He said Bennett never gives up and never seemed to get a chance yet he gives others a chance. He thanked the fans too.

Funnybone and Super Beast beat Rey Xion and The Lion From Zion Samson and when Funnybone pinned Samson after the diving double stomp and Super Beast pinned Xion with a powerslam at the same time. Mr. Gomez and Crystal White were in the corner of Super Beast and Funnybone. White was looking stunning as usual and it appears that she and Super Beast might be an item as they caressed each other after the match and he held the ropes open for her life a monstrous gentleman so she could leave the ring.

Skye Blue pinned Keira Hogan when Tasha Steelz tried to interfere on the ring and collided with Hogan by accident. Hogan and Steelz once again had the Impact Wrestling Knockouts Tag Team Titles with them. To show how long this day has been for everyone, Hogan accompanied Steelz at ringside for Allie Kat’s Hot Girl Shit show on FITE twelve hours ago. You can find those results too on the site.

Stunt Marshall won the GCW Title in a 3-Way Match over Chuckles The Clown (the champion) and Suge D in a fluke finish by pinning Chuckles while crawling over him to try to reach the ropes to break up Suge D having him in a half crab. Suge D thought he won by submission and didn’t see what was going on.

GCW Women’s Champion Queen Aminata pinned Rache Chanel after spraying hairspray in her face when the referee was trying to separate them followed up by a Fisherman’s Neck Breaker and the diving flip senton.