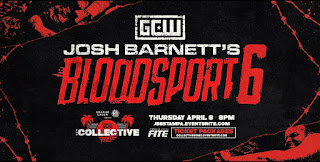 Rich Palladino is the ring announcer. He announced the names of everyone on tonight’s roster and had them come out to the ring for an opening ceremony.

As usual with BloodSport, there are no ring ropes. Knockouts, submissions, referee stoppage, count outs, or disqualifications are the ways to win. No pin falls.

KZT (aka Karen Tran) beat Janai Kai by arm bar submission. Tran used to work behind the scenes at AXS TV. She was responsible for the graphics and promotional videos for New Japan Pro Wrestling, AXS TV Fights, and WOW-Women of Wrestling during her time at the basic cable network. She’s also a pro wrestler who is the heel character Exodus in Malia Hosaka’s Exile stable in WOW.

Super Beast beat SHLAK by Disqualification when SHLAK started biting the boot of Super Beast to try to break a submission hold. SHLAK was a bloody mess. They got into a bit of a pull apart altercation afterwards but the referees and members of the locker room broke it up.

Davey Boy Smith Jr. beat KTB by Knockout with a powerbomb. They shook hands after.

Chavo Guerrero Jr. beat Rocky Romero by referee stoppage after a brain buster by Guerrero followed up by a couple of strikes.

Josh Barnett beat Jon Moxley by referee stoppage in a bloodbath when Barnett stomped on Moxley’s face and head. Moxley argued with the referee because he didn’t tap out. Both guys bled very heavily.

Barnett did a promo and said there would be more to come and it wasn’t a fly by night promotion. He ripped on pro wrestling a bit and said it’s not about catchphrases or showing off their gear in BloodSport.

Moxley said it wasn’t about catchphrases because he himself hasn’t been able to think of one yet in 10 years. He thanked the fans for buying tickets and t-shirts to keep everyone going.