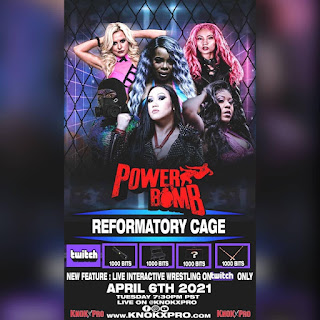 Tonight features just one match. It’s a ladies Turmoil Match inside the big Reformatory Cage that the group holds bouts in each Tuesday night. The rules are two start off with a new person entering every few minutes and elimination are by pin or submission.

Dan Praete and The James Jeremyah are the announcers.

Danika Della Rouge vs. Viva Van start it off. Another competitor enters in every 3 minutes.

Suzy is #4. (Not the Impact Wrestling star)

Weapons gets released after a certain amount of “bits” donations. A stop sign and kendo stick are the first two legally allow in.

‘Strella is the last to enter at #6. She dominates everyone else but there are no eliminations at all so far.

‘Strella is eliminated first after all five other women took her down and piled on top of her for the pin.

A chair is released in as a weapon.

Viva Van pinned Della Rouge to win the match with a Japanese Ocean Cyclone Suplex that she calls the Straight to Hell Suplex.