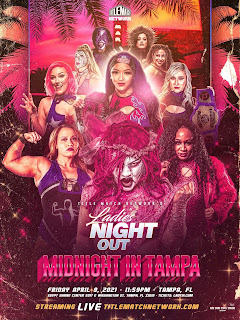 Ladies Night Out results of “Midnight In Tampa” from Tampa, Florida, USA 🇺🇸 at Egypt Shrine Center on 4/10/21 live on Title Match Network:

This show was supposed to start at 11:59pm EST on 4/9/21 but because other promotions ran long in the venue throughout the day, it didn’t start until 1:03am EST.

Rich Palladino and Robyn Reid are the broadcast team. Palladino is also in his usual ring announcer role.

Alejandra The Lion pinned Dani Mo after a face plant.

Raychell Rose beat Rok-C by arm bar submission. Good intense match. Rose raked Rok-C’s eyes as the referee was trying to separate them. Rose connected with the Claymore Kick but Rok-C grabbed the rope to break up the pin. A frustrated and angry Rose then repeatedly rammed Rok-C’s arm into the mat to set up the finisher.

Holidead and JennaCide beat Harlow O’ Hara and Vipress. The finish came when Holidead used her body buster finisher on Vipress and JennaCide gave O’Hara a tombstone at the same time. Holidead decided to steal JennaCide’s pin on O’Hara for the win. JennaCide wasn’t happy about it and they got into a brawl and went out of the building. They will face each other on the Mission Pro Wrestling event on 5/1/21 in Buda, Texas that will air on Title Match Network.

Jordynne Grace pinned Allie Kat with the Fall From Grace pump handle driver. Good slobber knocker match. To further show what a class act Grace is, she still took time to fist bump with fans and sign autographs after such a long day.

Mission Pro Wrestling Champion La Rosa Negra pinned Skye Blue after the Frog Splash. This was Blue’s fourth match over the past several hours. She pinned Keira Hogan on the Generation Championship Wrestling event that aired just before this show.

Jazz pinned Keira Hogan when Hogan once again collided with Tasha Steelz who tried to interfere by getting up on the ring. Steelz and Hogan were acknowledged as the Impact Wrestling Knockouts Tag Team Champions and they had the belts with them.

LNO Champion Ivelisse beat Su Yung by referee stoppage when Yung passed out in a submission hold. Yung accidentally spit the red mist at the referee and he was bumped. Yung then tried to hit the Panic Switch but Ivelisse blocked it down and locked in the submission. Another referee ran down and called it. Ivelisse’s back was a mess with welts and scratches. She brought out the SHINE Title with her as well.

Palladino and Reid did a fantastic job on commentary especially having to work so late. They had great chemistry. Palladino proved he’s more than just a ring announcer.