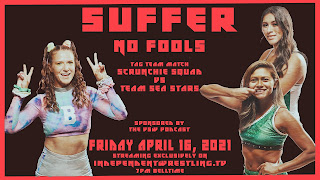 Travis Huckabee beat Matt Makowski by Stretch Muffler submission. After the match, Huckabee did a backstage promo. He said everyone has been talking about Makowski lately but he's the guy who just beat him tonight and people need to start talking about him too. Makowski said he hates losing but losing to a guy like Huckabee makes it a little easier to deal with.

Ashley Vox and Delmi Exo beat Becca and Davienne when Vox pinned Becca after the Floppy Fish double team finisher. Becca accidentally gave Davienne a spin kick to knock her out of the match before the finish. Vox and Exo did a backstage interview. They said they were fired up and banged up with the win. They want to be a regular part of the LW Tag Team Division. Becca and Davienne were about to be interviewed next but Ava Everett crashed their time. Everett made fun of them for losing and hid behind two guys as male bodyguards so nobody could touch her as she continued to mock.

TJ Crawford did a backstage promo to hype his match next.

Tyree Taylor pinned TJ Crawford after a lariat followed up by a huge sit-out power bomb. Taylor did a backstage interview. He said it was 4 wins straight in LW and everyone knows that nothing can stop him from going to the top.

Becca bribed ring announcer/backstage interviewer Ethan Scott in the back. She told him she would give him a collector’s edition scrunchie on the condition he makes sure to give Ava Everett some backstage interview time. He agreed.

Kevin Blackwood pinned Robert Martyr after a diving double stomp. LW World Champion Daniel Garcia was in the corner of Blackwood acting as a coach. Martyr did a fired up backstage promo afterwards. He said he proves he belong in LW even with the loss. Blackwood was annoyed by the cameras creeping up for comments backstage. He said his attitude has changed and he thanked Garcia for it. He said Garcia helped show him focus.

Ava Everett beat Ricky Archer by Dragon Sleeper submission. Really good intergender match. She gave him a flying body press but he caught her in the air and quickly and turned it into a powerslam. Later, she gave him an electric chair slam. Everett is one to watch in 2021. She has big league potential oozing from her as a character and in the ring.

Ethan Scott approached Everett for an interview backstage like he promised Becca. She noticed the scrunchie in his pocket and got angry that he was associating with Becca. Becca then attacked Everett from behind and put a scrunchie on her. She took a selfie with her on the ground to humiliate her.

JD Drake pinned Rip Dyson after the Drill Bit. An excellent “hoss fight” with lots of chops and high impact moves exchanged. They did so much it was hard to take notes. Drake did an excellent backstage promo afterwards. He said the win was all heart and passion. He said for all the people that dropped the ball on him and passed him by it just gives him more motivation. He said he will be closely watching the main event and called Daniel Garcia out. He said if Garcia retains the LW World Title tonight, he wants the next shot and he will make Garcia tap.

LW World Champion Daniel Garcia beat Lee Moriarty with a choke submission via referee stoppage. Seconds earlier it looked like Moriarty won by arm bar submission. Garcia did tap out but the referee was out of position and didn’t see it. Kevin Blackwood was in the corner of Garcia.

Drake got on the mic and called Garcia out face to face. He pointed out that Garcia tapped and said the whole thing was bullshit. He slapped Blackwood and people came out to separate everyone before it got out of control. Drake then got in the ring and demanded Garcia have the title match now. Garcia got in the ring and threw a towel at Drake. He quickly ran out toward the locker room with Blackwood as the show ended.

This was a really strong and solid show from top to bottom. They are one of the best indies on the scene and they don’t get much mainstream attention. Definitely worth checking out.