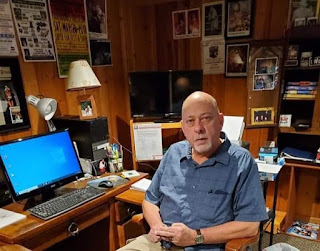 A major source to “Wrestling... with Demons” has died. It is with heavy heart and mind that I report pro wrestling Michigan historian and occasional wrestling promoter Mark Bujan has passed away at age 61. He died on 4/10/21 of an apparent heat attack according to Mark Nowotarski.

Bujan was the owner and moderator of a few popular Facebook groups that honored pro wrestling history from the 1950s to the 1980s with a big focus on Detroit’s Big Time Wrestling which he loved so much. He kept in touch with many of the surviving stars from BTW and he would personally and publicly keep many of us up to date on any new projects of the legends and their health status. If it wasn’t for Bujan, W.W.D. probably wouldn’t have known about the recent deaths of Eddie Farhat, Jr. and The Bug to pass along to the public and to PW Insider and Wrestling Observer.

He posted on his social media a few days ago that he was going to be taking a break from being active in the Facebook groups because he wasn’t feeling well from diabetes. A friend of his told me that they had just spoken to each other on Friday.

I first met Mark in 1994 during my days of covering pro wrestling in Detroit on radio and TV. He was co-promoting NWA shows in Michigan at the time and acting as the figurehead president. He asked if I could give the events some press. I gladly agreed. In those days before social media you weren’t made aware of indie shows running unless you saw a flyer or someone personally told you about it. The events gave more content to cover and it made the listeners aware of something new to check out.

Mark's passing is a huge loss to many of us personally and professionally.